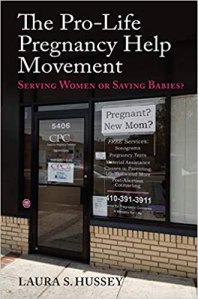 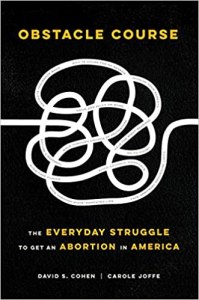 Recently, I reviewed two books for a librarians’ journal. Although both examine the experiences of U.S. women who wish to terminate undesired pregnancies, the two books couldn’t be more different. Obstacle Course: The Everyday Struggle to Get an Abortion in America, by David S. Cohen and Carole Joffe, is as straightforward as its title. Using first-person accounts by abortion providers, clinic volunteers, reproductive rights activists, and women seeking abortion, the authors chronicle the difficulties that confront women in most parts of the country: a distressing tangle of TRAP laws, long waiting periods, harassment by anti-abortion protesters, and state-mandated falsehoods that physicians must deliver to their patients before an abortion. These obstacles—which of course disproportionately affect women of color, rural women, and the poor—make accessing abortion far more time-consuming, expensive, risky and stressful than it needs to be (and certainly far more difficult than it is in any other industrialized country).

Cohen and Joffe don’t just focus on the negative, however. They also describe the situation in areas of the U.S. where abortion access is routine. In these places reproductive health clinics are not subject to TRAP laws, women seeking abortions are rarely harassed or stigmatized, and state financial assistance is available. Also, in some states early abortion is possible via telemedicine, and in a few jurisdictions abortion by means of medication can be overseen by physicians’ assistants or nurse practitioners. Obstacle Course is readable, nuanced, and comprehensive; if I were still teaching, I would happily assign it to undergraduates.

The second book, The Pro-Life Pregnancy Help Movement: Serving Women or Saving Babies, by Laura Hussey, has a title that immediately reveals the author’s anti-abortion bias (“pro-life” and “saving babies”). Hussey frankly admits her early involvement in anti-abortion activism and her belief that human life begins at conception. Given her own anti-abortion advocacy, it is not surprising that Hussey’s treatment of the crisis pregnancy centers (CPCs) is admiring and uncritical. Because the CPCs have received negative press for their deceptive practices and intimidation techniques used against women seeking abortion, they have been rebranded by their supporters as “pregnancy help centers.” Hussey not only accepts the rebranding, but styles the women she surveys as benevolent, religiously-motivated “social reformers” whose opposition to abortion stems from their deep desire to serve women.

In Hussey’s account, CPC personnel distance themselves from the more extreme wings of the anti-abortion movement. Interviewees claim, for example, that they avoid what they euphemistically term “sidewalk counseling” but which personnel and patients at abortion clinics see as traumatizing harassment. CPC employees also claim that their work is non-political, and that they have nothing to do with lobbying for TRAP laws, mandatory pre-abortion viewing of ultrasounds and anti-abortion videos, and other barriers to abortion access so ably chronicled in Obstacle Course. (By the way, Karissa Haugeberg paints a very different picture of the women of the CPCs and their support for and in some cases participation in violent anti-abortion activities; see my review of her Women Against Abortion in this earlier post.)

There are numerous questionable aspects of Hussey’s laudatory treatment of the CPCs. To my mind, most damning is her refusal to take a stand on the junk “science” that the CPCs disseminate to their clients. CPCs routinely claim that abortions cause breast cancer, are more dangerous than carrying a pregnancy to term, negatively affect women’s long term mental and physical health, and so on.

These false claims have been refuted by professional bodies ranging from the World Health Organization to the American College of Obstetricians and Gynecologists. Yet Hussey portrays the CPC propaganda as having equivalent weight to those refutations. This stance is inexcusable. By spreading medical misinformation, the CPCs give the lie to their claims to be serving the interests of women.