Over the past few days, the news media as well as social media platforms such as Facebook and Twitter have been abuzz with news of the U.S. Supreme Court’s 5-to-3 decision in the Whole Women’s Health v. Hellerstedt case. The court struck down the Texas state legislature’s 2013 restrictions on abortion clinics; these restrictions had already caused half the abortion clinics in Texas to close, and threatened many more. A June 27 article in The New York Times called the decision “the court’s most sweeping statement on abortion since Planned Parenthood v. Casey in 1992, which reaffirmed the constitutional right to abortion established in 1973 in Roe v. Wade.” 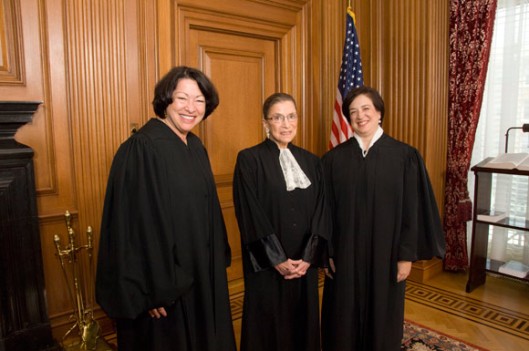 Justices Sotomayor, Ginsburg, and Kagan. There was a gender gap in the 5-to-3 decision. The women justices voted 3-to-0 to throw out the Texas TRAP law; the men voted 3-to-2 in favor of the Texas restrictions.

People interested in women’s reproductive health have heralded the decision as signaling the likely end of most of the so-called TRAP laws (targeted restrictions on abortion providers) so beloved by right-wing state legislators all over the country. Indeed, anti-abortion forces view Whole Women’s Health v. Hellerstedt as a shocking defeat. (The Washington Superior Court ruling against the Skagit County hospital district for failing to provide abortions that I was so pleased about last week seems like very small potatoes in comparison.)

I have to admit that when I first heard of the Court’s decision, I was as ecstatic as anyone else, and did not particularly cavil at the descriptions of Whole Women’s Health v. Hellerstedt as being a death-blow to the U.S. anti-abortion movement. Upon reflection, however, my enthusiasm has become more measured. Such court decisions are welcome, of course. But history has shown us that one cannot rely upon the courts to ensure fair treatment. After all, the Miranda v. Arizona court decision of 1966 (which limited police powers and required that arrested persons be informed of their right to a court-appointed lawyer) has not notably resulted in equal justice for the poor. And anyone who knows anything about the recent history of abortion in the U.S. is well aware that neither Roe v. Wade nor Planned Parenthood v. Casey ensured access to abortion for women of scarce resources outside of certain major metropolitan centers.

Anti-abortion zealots are already regrouping, and strategizing about what their next moves will be. Their onslaught against the health rights of women over the past few decades has been unceasing, and there is no reason to assume that they will view Whole Women’s Health v. Hellerstedt as anything other than a temporary setback. The TRAP laws have certainly been an effective tactic. But women are also denied access to abortion through intimidation of health care professionals and patients at the doors of clinics, cuts in funding to clinics that provide reproductive health services to the poor, and the failure of more than a handful of medical schools to require their students to learn procedures to terminate pregnancy.

It is, of course, far better for abortion to be legal than illegal. But that is not the end of the story. Sometimes a place where abortion is illegal can have better access than certain other places (such as many rural regions in the U.S.) where it is legal. Take, for example, the South American country Uruguay, which in 2012 became the second country in Latin America and the Caribbean (after Cuba) to legalize abortion under a broad range of circumstances. Interestingly, already for a decade or so before legalization, Uruguay had succeeded in drastically reducing maternal mortality from unsafe abortions by means of “before” and “after” appointments for poor women at the public hospital. Physicians would see women contemplating illegal abortions to instruct them in the correct administration of misoprostol/Cytotec, though they would not provide information on how to acquire the drug (which in any case was freely available over the internet). After the women self-aborted chemically, Uruguayan physicians would confirm completeness of the procedure and if necessary perform a uterine aspiration if there were any complications. This subtle skirting of Uruguay’s abortion prohibitions has come to be known as the “Uruguay Model,” and has been informally adopted by doctors in other countries with restrictive abortion laws, such as Uganda, Tanzania, and elsewhere. See the article by Patrick Adams in The New York Times.